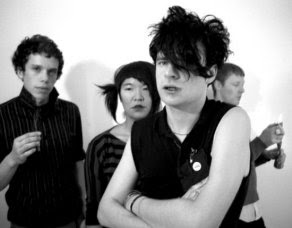 Sound quality is 'A'.

Sure anyone who knows me has heard me speak of plenty of bands that deserve some just due and most of them have it on one level or another and would we (who ever 'we' are) or I (got a decent grasp on who 'I' as in 'me' is .. or perhaps not and maybe thats half the fun) want these bands to get that type of spot light from every tom dick and dave mathews band loving sheep no taste tool around? A quick siting of Janes Addiction would bring most of us to a firm "No".

But I' not going on about the New Model Armys or Southern Death Cults of the world, bands most educated music lovers have at least heard of, I'm talking about the Positive Noise and the Organs, the Radio Berlins of the world.

Names when I say to people who are educated look at me and go "who". And sadly and excitingly as a music lover it's always a rush when someone who you feel understands what music means to you can actually turn you on to a band you don;t know squat about. Sad for the band but great for those of us who get to add a new group into our personal mix.

So I post Radio Berlin out of love and respect, and I used to get to talk to Jack every now and again thru the interweb thing and I used to kinda do a lil thing on some corner on the interweb thing about new sounds and I did include Radio Berlin and always had the support of the band in doing so. Maybe this post will spark hugh sales and they'll reform ... no no dont wake me up it's pretty cool here right now.

You my ask, well who was this Radio Berlin and in all truth it would depend on the era within the band, they did have a shifting about of members but only 2 and only the once from what I understand.

They formed from a few defunted Vancourver bands (that I had never heard of until I heard Radio Berlin) and for the 1st 4 or so years it was Jack Duckworth git/keys/vocs, Chris Frey bass/vocs, Warren Hill keys/piano and Joshua Wells drums/git/keys for a year or so it was Jack Duckworth, Chris Frey, Brad MacKinnon drums and Lyndsay Sung keys/piano and then for the last 2 years or so Joshua Wells re joined the band.

I don't know if Brad ever had any material recorded and put on an album, but Joshua was/is one hell of a fuckin drummer. Focus on the drums in Aftermath for ref point #1 ... amazing.

Radio Berlin is rumored to have quite a few singles in the UK but I know of none really, so if anyone has info on them drop a line, here is their discography as I know it to be (Keep in mind I got into these guys in 2001 with the the lp Selection Drone)

1999 Heart Of Industry 7in
1999 Split with Kid Commando, Radio Berlins song on this is great and I will rip it anmd post it soon but Kid Commandos songs are I think all renditions of the same song and suuuuuck.

There was to be a CDEP in early 2004 that never saw the light of day, for some time I made it my job to email the company who was to issue the EP to see when and keep the pressure up but to mine and many others disappointment it never came out, Radio Berlin disbanded and it was shelved.

I have tried over the years to get Jack to send me mp3s of the tracks just so I can hear them, but they are not fully mixed tracks and for some reason, be it legal or what not he's never sent them along. Bummer...

It's been a little over a year now since I talked to Jack, I know he and others have moved onto other projects and I used to have them all written down to look into but have since lost the paper so I can't at the moment be of any help in that department.

I'll admit I was a big supporter of the band and would email support pretty often but alas Jack once told me after the band was over "wrong time in the space of time" but I disagree, with all the "Post Punk" shit out there over the last decade, some good and some just a horrid embarrassment, Radio Berlin were in the proper space, they, like may 'REAL' bands were just that, seekers of a truth that only the 1% are also after, the other 99% are just tools.

So we lost another great band to mass media of the interweb age.

It took me some time, media fire only allows for 100 meg files and I wanted to keep this to 1 zip file so it was hard to pick the tracks but .....

For your listening and spiritual freedom pleasure I present to you ..... Radio Berlin.

Thanx to the photog.

I'm always paying attention. :-) Thanks for everything!

im a gonna check these people out many thanks!

yes i think the topic was covered in the post.. maybe it was through email ...

the glitches are actually in the original source files I have which are mp3s. so I cant fix....

the only way would be to get a copy of the source tapes but for all i know that may not really exist, it does at times sound like glitches ie bad cd encode and at other times like radio drops ... so ... if I had clean source files I would have re ript and fix by now.

try not to kill any more ladies in showers herr psycho .. think maybe you need psychotherapy ...

thanks for your friendly comments (haha) i never saw any comments pertaining to the problem with the fall on the wireless. and still don't i thought we were all friends here

Just found your site earlier this week. Thanks for the Liz Phair postings.
Can't wait to look around more.
Thanks
rockymustard

we are all friends ,,, i must of had the conversation with someone thru email.

your nym psycho, just made me think of the movie of course so thats what the comment was ref to ... i was hoping you'd get the joke <;-)

Great great band, I would occasionally contact Jack in the olden days, just because RB was such an influence on my own band Hearts Fail, but he didn't seem too much into the fan connection thing...
Eddie - Hearts Fail

Welcome to Symphony Of Ghosts.

This blog will be an attempt to archive out of print recordings and live bootlegs by various bands with a focus on the wonderful and beautiful KatieJane Garside.

Living in the north central part of the United States has not allowed me the opportunity to see KatieJane Garside live in any of her projects. I missed Daisy Chainsaw when they came to Chicago and thought "There will be more chances". It seems to date I was 100% wrong.

So here on this blog I will attempt many things including the recordings of many bands, but the main focus will be KatieJane's career and sharing live recordings for people who like myself are hypnotized by her yet haven't the chance to see her live in person.

Time permitting I'll encode most of my vinyl and cassettes but that will likely take some time, I've been meaning to get around to it for years and they pass and pass.

As I get them done I'll post them here. But for the time being I'll focus on live recordings.

Reposts: if you need a repost please reply to the most recent post and let me know what you need or email me (email below)

If there are any legal problems with any of the postings please notify me and I'll take appropriate action.

louissyfer
Heaven doesn't want me, hell's afraid I'm going to take over. I am not a suggestion box for my country. louissyfer[at]gmail[dot]com